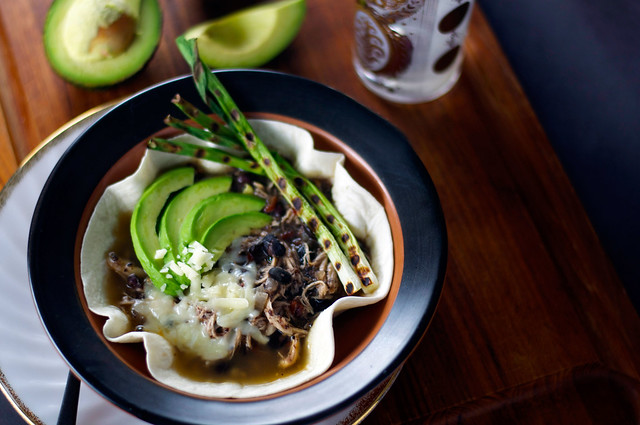 There's a Mexican restaurant in town that is fairly close to the apartment I used to live in, and about halfway between that apartment and work, which means I was there quite a bit. (You know, before I decided to branch out and eat at other ... Mexican restaurants.)

My people eat a lot of Mexican food.

It was just the right combination of cheap and trashy, but the margaritas were always on special, the salsa was jammed with cilantro, and the food gave the impression that someone in the kitchen really cared about what s/he was doing.

For a while the restaurant closed, when someone tried to turn the strip mall it's in into residences, but when that venture failed it miraculously returned! Unfortunately it's been a little fancified, replacing some of its lovable cheap trashiness with dimmer lighting and the rumbling cacophony of Other People's Children, and we haven't made it to the new incarnation with the same frequency. When the magic of sticky tables and puckery margarita mix and green carpet–covered floors has passed, it has passed.

Still, even in a town with a Mexican restaurant on nearly every corner (and Birmingham certainly applies as one of those cities), it can sometimes be difficult to find menu items outside of the box of the usual tacos, burritos, and nachos—also known as the holy trinity, amen.

I am not here to undermine the many, many wonderful attributes of tacos and burritos and nachos, but sometimes it is nice to break free of those flavor profiles. And the dish I always ordered at Mexico Lindo was the pollo adobo (which seems to have been renamed the pueblo lunch): "black beans topped with chicken in hot adobo, onions & queso fresco."

At Lindo they serve the dish in a wide, shallow bowl, lined with a flour tortilla to soak up the beans and the smoky broth, and topped with a light sprinkle of cheese and charred green onions.

There are a lot of alterations to that basic idea here—I am, as you can see, not a girl with a talent for light sprinkling where cheese is concerned. That's Monterey Jack, too, because my market didn't have any queso fresco. I also shredded the chicken, as opposed to crisping chunks of it on the flat top, the way it's served in the restaurant version. Because I'd gotten home from work pretty late this day, I picked up a rotisserie chicken and shredded it into the broth, but really any kind of protein you like would work here. (I have a dream that involves chargrilled shrimp.)

There's avocado here because I love it, and the signature grilled onions. I just placed mine in a dry grill pan until they developed some nice marks, the white ends got tender, and the green tips turned crispy.

I would add two chipotle peppers first, simmer, and then taste. If you like things a little smokier/spicier, feel free to add more! I dipped in about a teaspoon of extra adobo sauce at the end for a little kick. You can season as you go, too—I try to keep an eye on my salt intake when I'm cooking for myself, so I seasoned at the end so that I didn't layer too much on as I went. Start with 2 cups of water, and then add if you feel like things start to dry out. I started with 3 and found the results slightly soupier than I'd planned on.

I like to dip the green onions into the sauce and then eat them like Twizzlers, but for leftovers I simply chopped them up and stirred them in. They add just the right hit of mild, grassy crunch for the warm broth, creamy beans, hearty chicken, and smooth avocado. 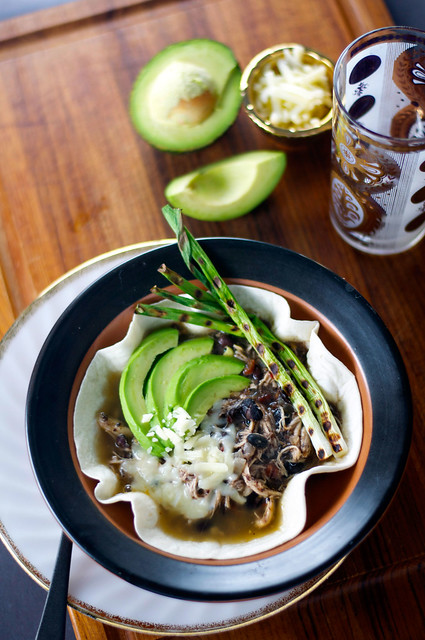 1. Place half of beans in a food processor with about ¼ cup water; puree until smooth.

2. Heat oil in a stockpot over medium heat; add onion, and cook 5 minutes or until translucent. Stir in garlic, oregano, and bay leaf; cook 1 minute. Stir in chopped chipotle peppers and adobo sauce; cook 30 seconds. Stir in chicken, coating with sauce. Stir in whole beans, reserved bean purée, and 2 cups water; bring to a boil, cover, and simmer 20 minutes or until slightly thickened. (Stir in additional water if mixture becomes too thick.)